December News
May the joy of Christ be with you this holiday season
and the celebration of our Savior's birth give you
joy and happiness in His free gift of salvation to those
that place their faith in Him! 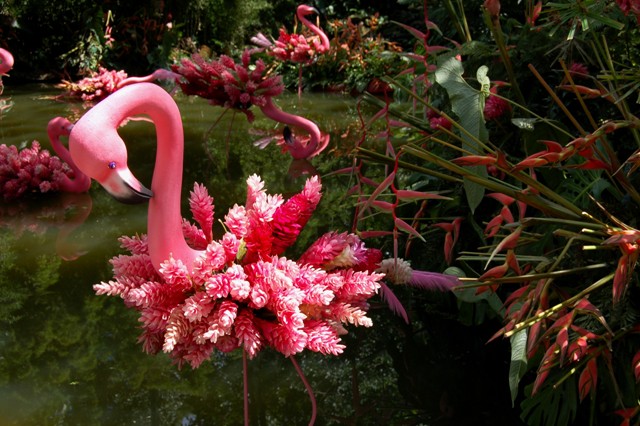 The Botanical Garden in Medellin


To follow God's will for our lives so that we can serve Him in all we do, go wherever He leads, and share His amazing love with those around us.

Continue to support mission projects around the world: 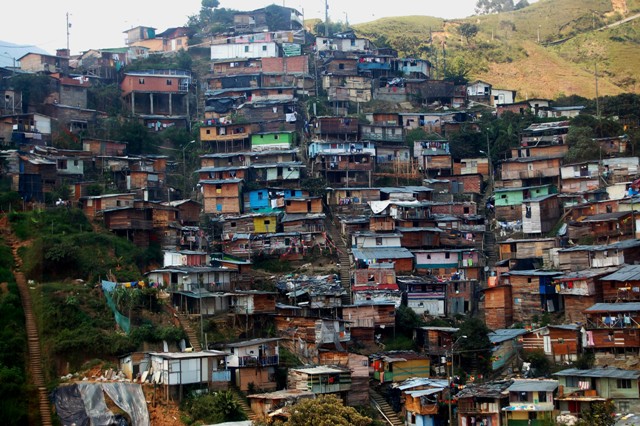 It is amazing all that is going on below you that you aren't aware of!
This is the view from the cable cars in Medellin 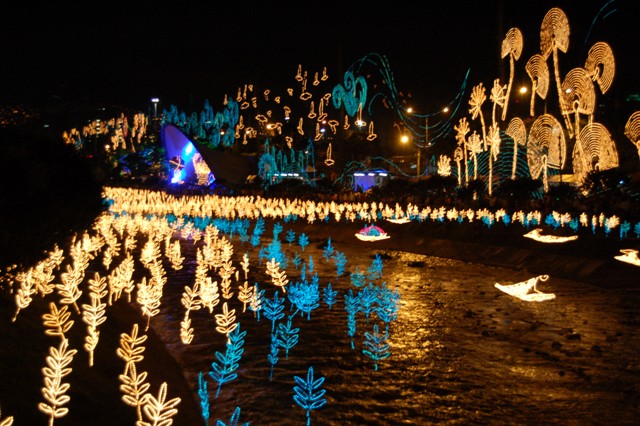 View of the lights on the river in Medellin
As the Christmas season approaches, everywhere in Colombia is covered and decorated in lights. Medellin is most famous for their display that can be seen on several sections of the river and various neighborhoods around town. 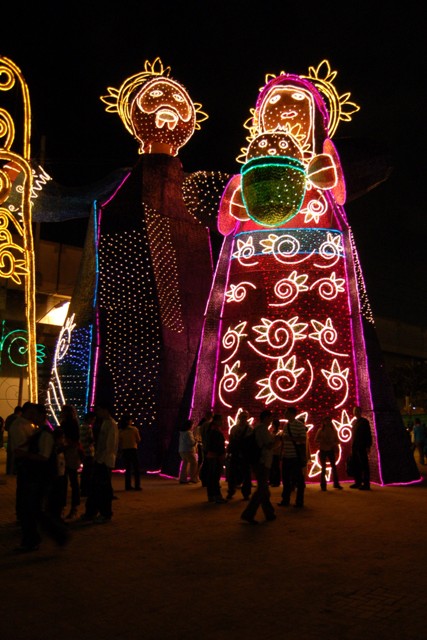 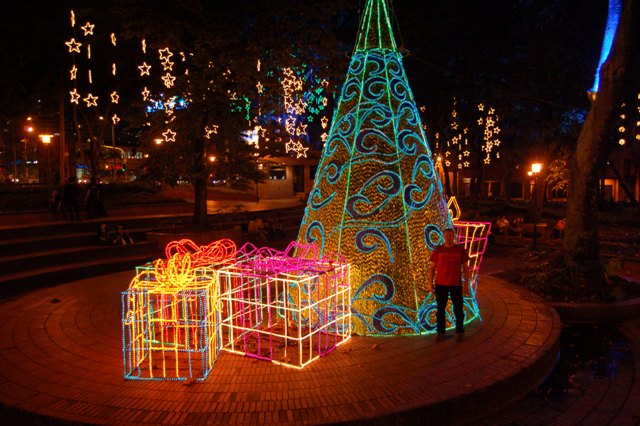 I wish the pictures could capture the magic of the neigborhoods all throughout town as everyone put out lights and decorations. It was on the edge of tacky,  but in a cool way as everyone gets together to be a part of the season. 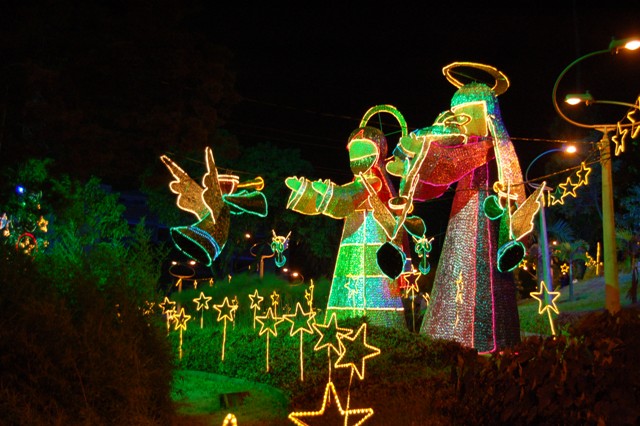 We were fortunate to have a cab driver that knew all the places to go and showed
us things that you don't see on the tour. 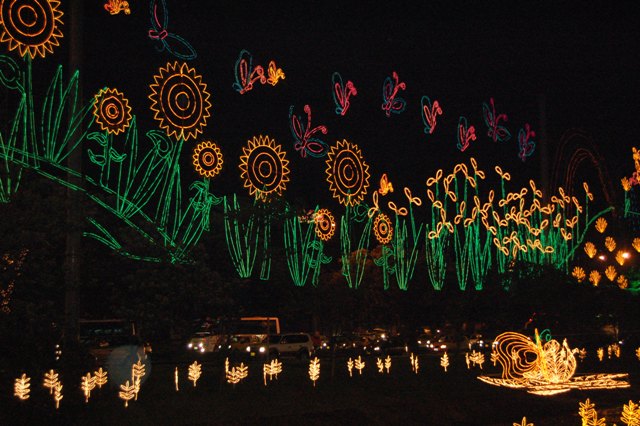 The light display on the river went for two miles 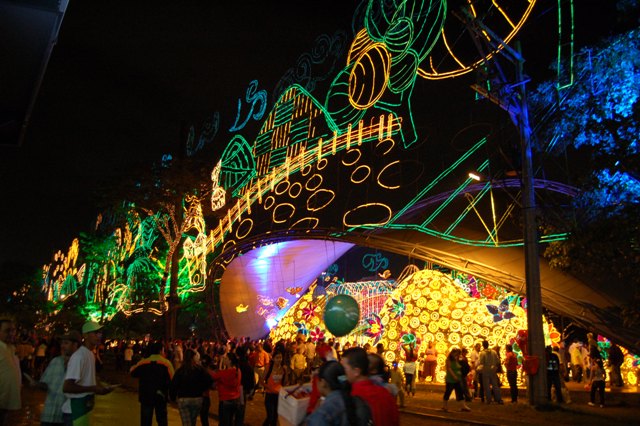 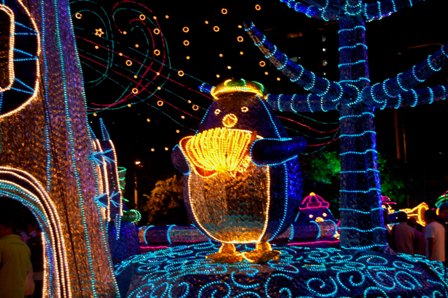 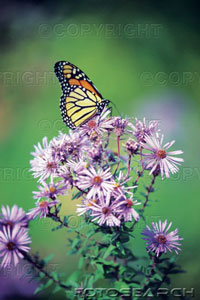 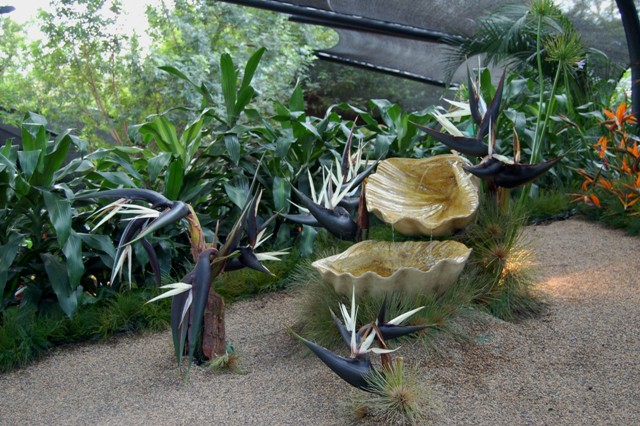 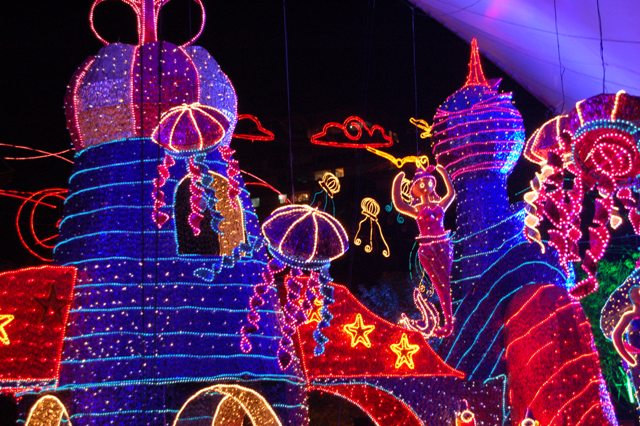 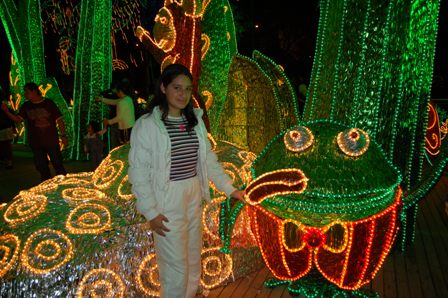 Graciela went with us and enjoyed the beauty of Medellin 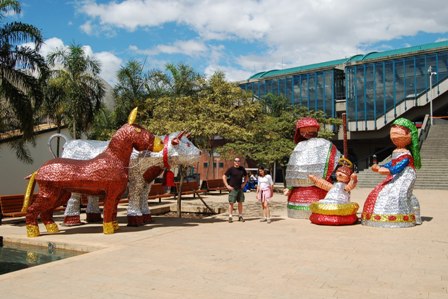 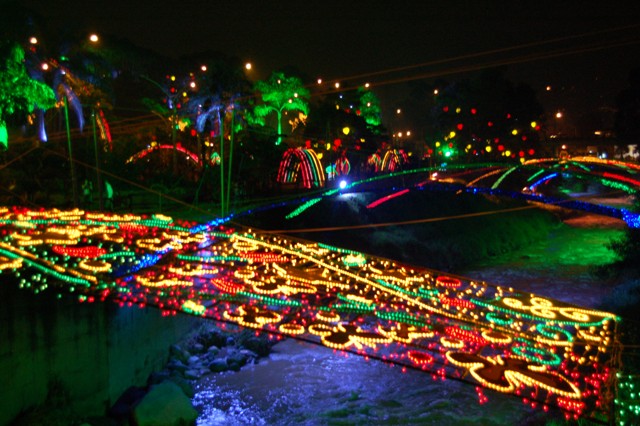 More lights and decorations and Medellin


As the year comes to an end, we think about what we have accomplished and what we hope to do in the following year. We both are continuing with our college classes and looking into our options of staying abroad or returning to the states. We are praying for guidance from God for a sign for a specific direction. I could go either way, but I think Steve misses the combo meals at Captain D's! (ha ha) 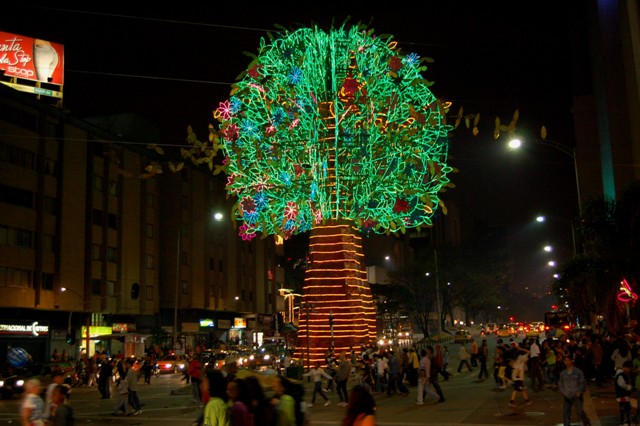 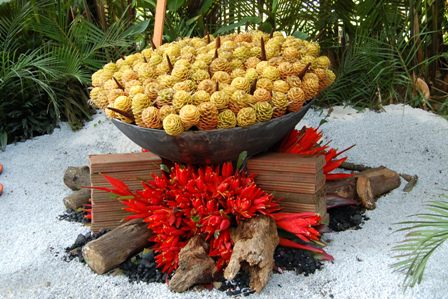 Both create an illusion from something else; one with lights and the other with flowers.

With Graciela visiting us from Ecuador -- the daughter of the pastor that we work with in Guayllabamba -- we visited Bogota and Medellin to show her the sights. She has gone from never having flown before, to three flights in one vacation! I think we all have learned a lot about ourselves during her visit and hopefully are better people because of it. I think the biggest lesson for me is to remember is that patience is a virtue and to treat others as Jesus would, regardless of what I get in return. We continue to plan for our mission trip to Ecuador in July and while we have a team coming, we still need to raise funds to complete the actual work. It's interesting that whenever we talk to the folks back home, they tell us how horrible things are economically, but after living in South America for four years and seeing lots of parts of the world, we have to remind them that even with all that, the poorest people in the United States probably live better than 80% of the rest of the world. 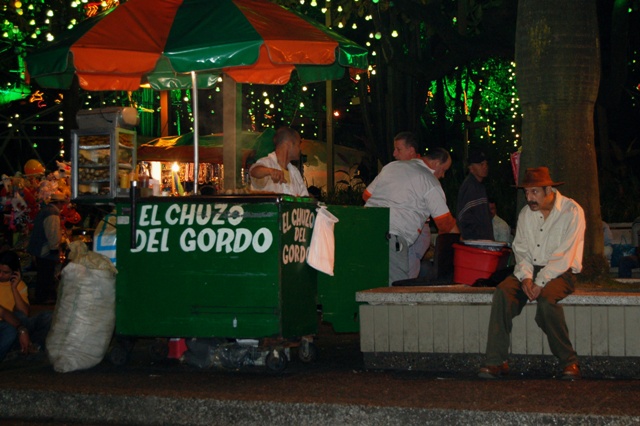 I just liked this guy at the park looking at the lights!


One of the neatest parts of Navidad in Latin America for me are the displays of the Nativity. They are usually huge displays on a porch or in the front of a store that have a cornucopia of scenes, various signed animals, villagers, and houses. Sometimes Baby Jesus is six times as big as Mary and the camels like dogs compared to the sheperds, but it is fun because it is like a Where's Waldo puzzle. 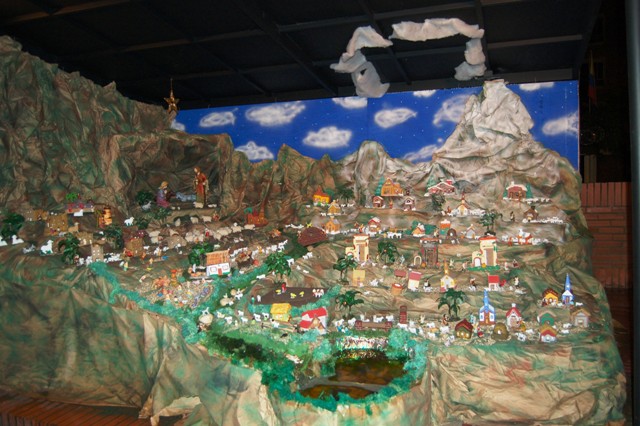 The Nativity display outside the Rosales Plaza in Bogota
One thing you don't see in the states -- but I have seen in Germany --is a single serve cigarette machine. There is even a lighter chained to the side to help you out. On the other hand, Colombia just passed a law that bans smoking inside public buildings and restaurants. 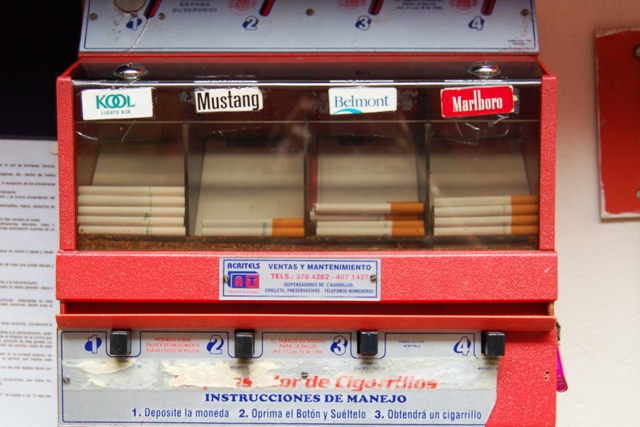 Even with all the selection of candy you see below, the kids still say the candy from the United States is the best and would trade almost anything for some. It does look more inviting than it actually tastes, but there are some taste sensations that are unique to Colombia. 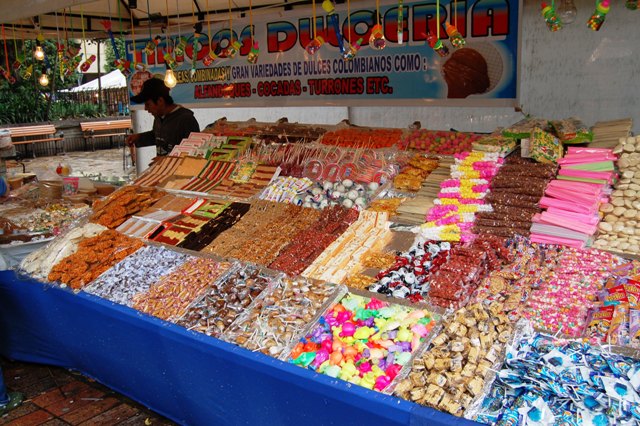 The Candy Man in Bogota 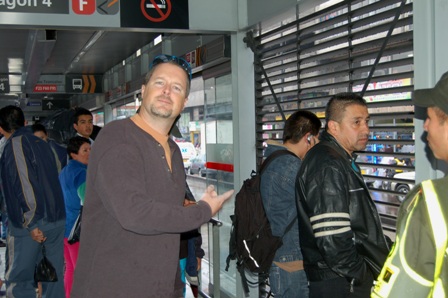 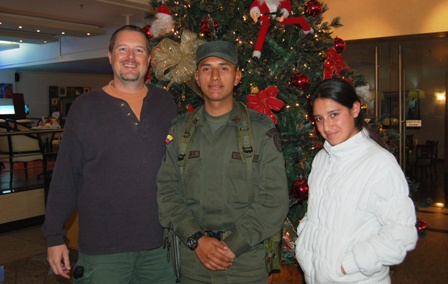 The theives and the police from our robbery in Bogota


<>We were definitely blessed and watched over by God while we were in Bogota. Steve got his pocket picked at the train station but realized it within a couple minutes. They got his wallet but no money, so we went to look in the trash cans thinking they may have thrown it away since it only had credit cards and ID. (It always works that way on TV) While we were looking, we saw the police at the next station and they had the guy that Steve recognized as the one that had been next to him.  They had been recognized by another person that had been robbed by them the previous week and the police had detained them. The one thief that robbed Steve was really cocky because he had already passed off the wallet to his partner, but the police had both of them and found his wallet on the other guy. Five hours later, Steve had them behind bars and justice was served for at least a little while. There is no way all the factors that fell into place just happened and as a rule, people don't catch thieves ten yards from where they were robbed. We try to remember to thank God for His role in the day every time we think about how blessed we are that the situation turned out the way it did. 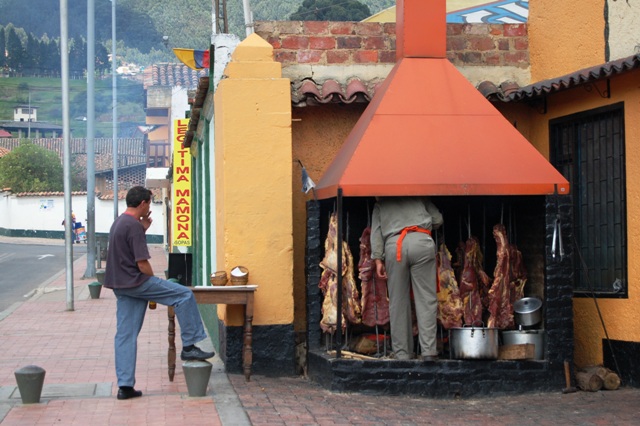 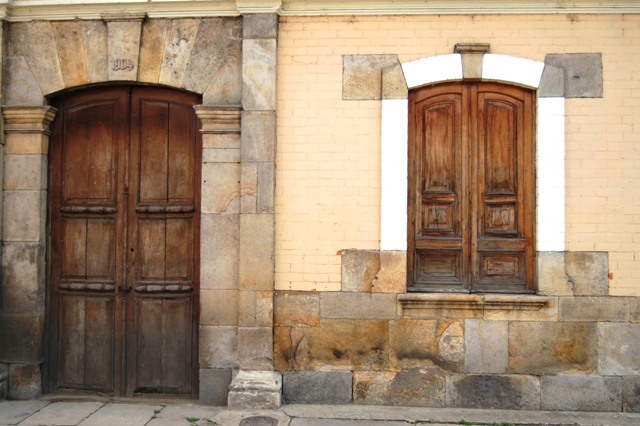 Scenes in the street in Zipaquira, home of the Cathedral de Sal 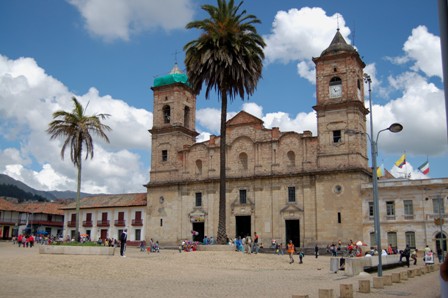 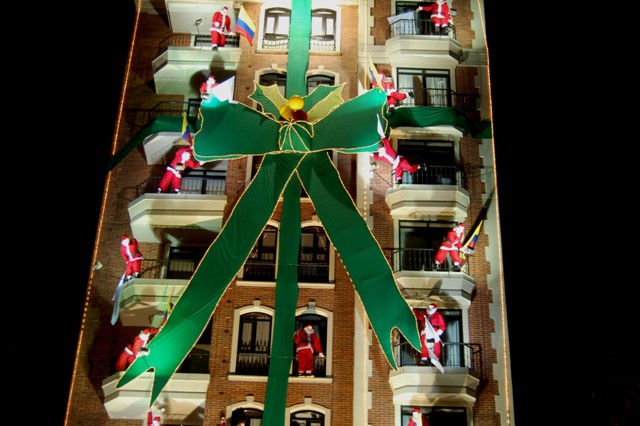 We have one more week of school and then we are off to Italy. Pray for safety for everyone traveling this holiday season, and for God to put people in our paths that we can share His love with. We don't feel like we have the opportunities here for mission work the way we often think of "mission work," and have to remind ourselves that wherever you are you can work for God; every place has people that need Jesus in their lives.


His love came down at Christmas time,
but his death on the cross at Easter gives us eternal life!